The Kano state police command says the Lebanese engineer who was kidnapped on Tuesday morning has been found dead in Kano State.

Recall that the expatriate who was an employee of Triacta Construction Company, was working on the underpass bridge at Dangi roundabout by Zoo road before he was kidnapped on Tuesday March 12th and his driver shot dead during the abduction.

He said the body has since been deposited at Murtala Muhammad Specialists Hospital in the metropolis and investigation continue into his abduction and killing.

Kano State Commissioner of Police, Mohammed Wakili is still trending over the way he handled the Kano Governorship election 2019. Here is the moment he was mobbed by Kano residents.

The senior Nigerian police officer, Wakili, has become highly loved for his sincerity and integrity. He ensured Kano State had peaceful elections amidst challenges. He has also combated Illicit Drug Sale, and has helped reduce the crime rate.

He receives so much love wherever he goes in Kano. They have even given him a nickname.

The police in Kano state have arrested the state deputy governor, Nasir Gawuna and the commissioner in charge of Local government and chieftaincy affairs, Sule Garo, for disrupting proceedings at the Kano State collation centre of the Independent National Electoral Commission (INEC).

The two top government officials had stormed the collation centre at about 2 am this morning and began to disrupt the process. Their actions led to a halt in the announcement of results at the centre after some youth suspected to be supporters of the opposition Peoples Democratic Party (PDP) tried to attack the two officials.

The police are expected to later release Mr Gawuna without charges as he enjoys constitutional immunity from prosecution based on the office he holds.

The Kano State High Court sitting in Kano has issued an interim injunction restraining the Kano State House of Assembly from investigating the bribery allegation against Governor Abdullahi Ganduje.

The presiding judge, Justice A.T. Badamasi gave the order on Monday while ruling on an ex-parte application by one Muhammad Zubair, the National Coordinator of ‘Lawyers for Sustainable Democration of Nigeria’. Justice Badamasi granted the application filed on behalf of the plaintiff by his counsel, Mr Nuraini Jimoh.

Joined as defendants in the suit are the Kano State House of Assembly, the House committee investigating the allegation against Governor Ganduje, and the Attorney General and Commissioner of Justice in the state. He held that the respondents were served before the close of work today while the hearing of the case should be accelerated.

Justice Badamasi also issued a four-day ultimatum for the respondents to respond to the application and ordered the parties involved to ‘maintain status quo ante’ pending the hearing of the motion on notice.  He thereafter adjourned the case till Monday next week for the hearing.

The embattled governor of Kano state, Abdullahi Ganduje, is to appear before Kano State House of Assembly ad-hoc committee probing the bribe-taking videos of the governor, according to a report by Daily Nigerian.

Be reminded that it had earlier been reported on videos between October 14 and 15, exclusively published by Daily Nigerian showing Mr Ganduje receiving bribe in dollars from a contractor.

As a result of the dust raised by the videos, the Assembly set up a committee on October 15 to establish the genuineness of the videos.

The publisher/editor-in-chief of Daily Nigerian had already testified before the committee on October 15, insisting that the videos were genuine.

Insiderswho would want to remain anonymous told  Daily Nigerian that the governor is expected to appear before the committee on Friday.

Sources told Daily Nigerian that the governor held a meeting with the speaker of the House of Assembly, Kabiru Rurum, and some top government officials on Tuesday.

During the meeting, insiders said the governor pleaded with the speaker not to invite him to testify before the committee.

“The governor was angry with the speaker as he refused to be part of the cover up. “But the removal of the speaker appears very difficult as he has the control of more than two third of the house.”

A  purported video of Kano state governor, Umar Ganduje, allegedly receiving bribes from a state contractor, went viral. The state government has released a statement reacting to the video. The government says the video is doctored by a certain extortionist.

Read the statement below. 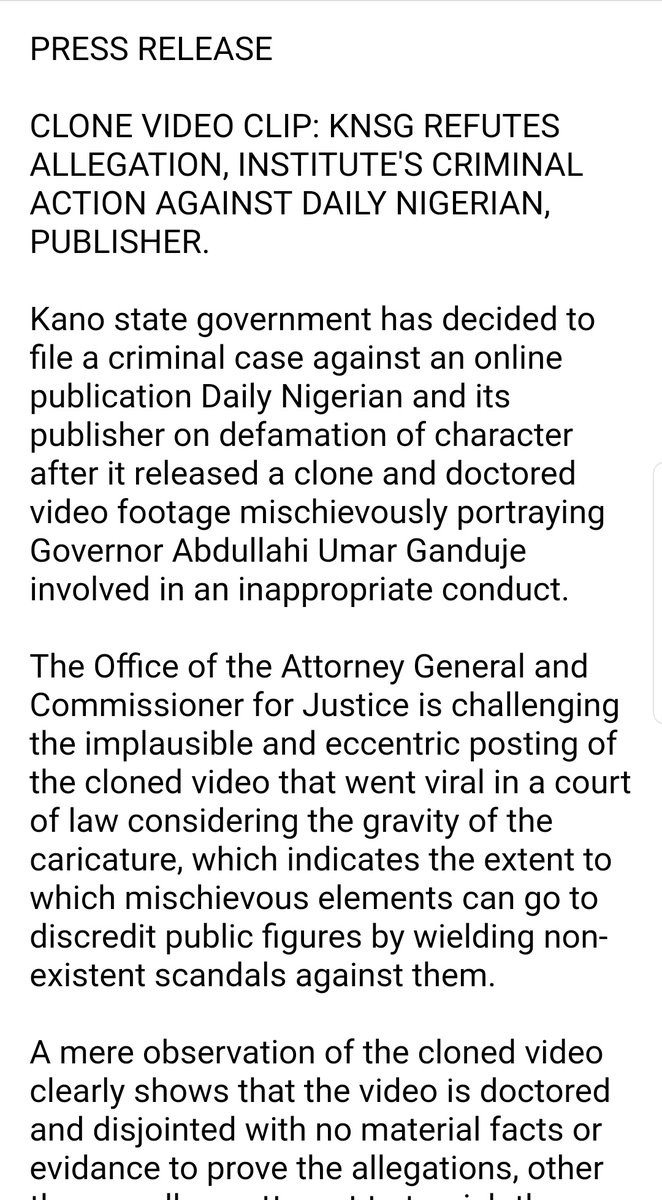 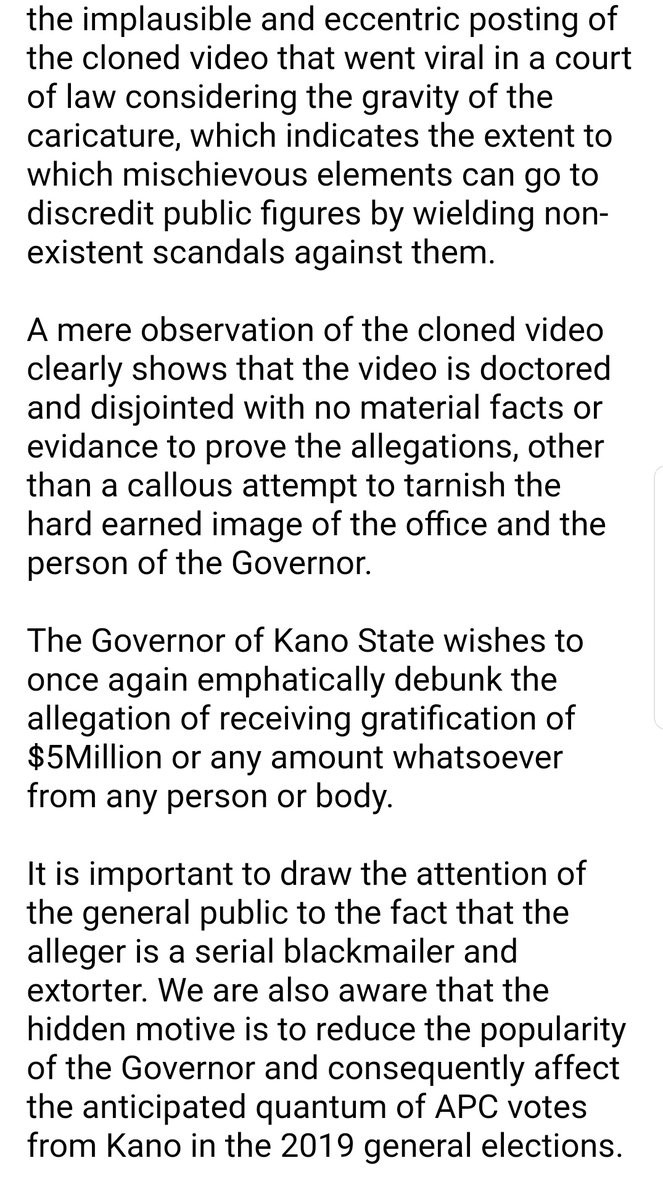 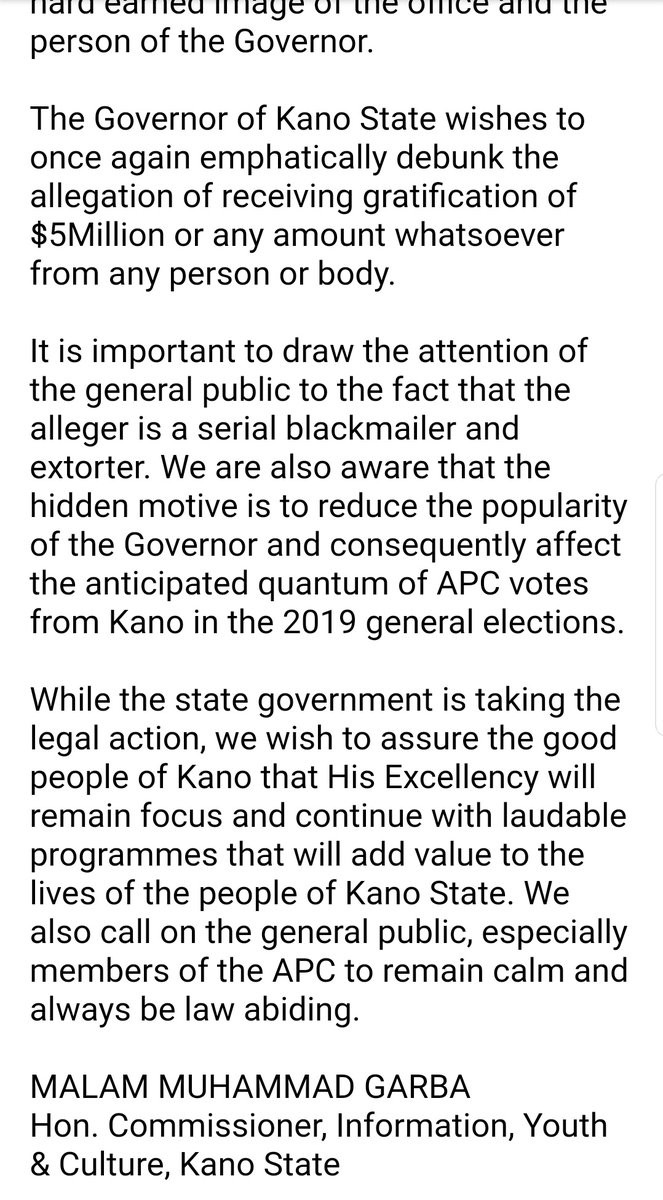